Three critical procurement best practices for electric utilities: Are you doing these? 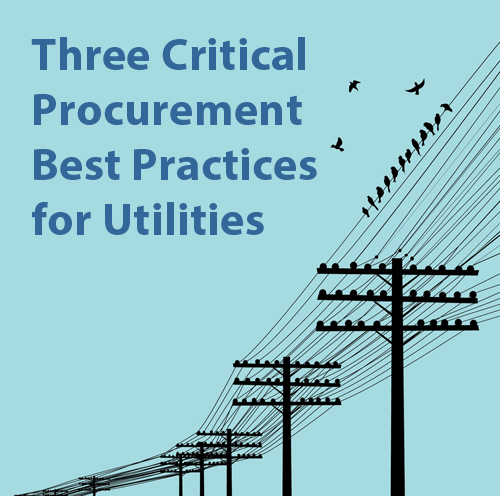 The industry is arguably facing more drastic changes now than at any time since restructuring in the 1990s. While the scope of these changes varies from region to region and between investor-owned and public utilities, the intensity is high for all participants.

These forces translate into increased pressure for utility companies to operate strategically and minimize risk. In this context, the procurement function is becoming a critical lever for electric utilities to achieve superior performance as they seek cost savings at every level.

Where does procurement fit for today’s electric utilities?

Consultants Frost & Sullivan estimate that utilities implementing best procurement practices can yield savings of 20 percent in materials costs. Robert Rudzki wrote in “Straight to the Bottom Line” that a typical Fortune 500 manufacturer could boost its return on capital to above 20 percent by managing its purchasing better.

Realizing the potential value of the procurement function has prompted utilities to move away from a transactional and cost-focused approach to one that aligns procurement with the organization’s broad agenda and a focus on total and lowest cost ownership.

But what does that look like on a practical level? How do world-class procurement organizations distinguish themselves? We’re going to look at three best practices that are hallmarks of top-performing procurement teams.

For example, Handfield said the quality manager at a large public utility told him during a Utility Supply Management Association gathering that suppliers had complied with pressures from his company to cut the costs of transformers, but the utility found they now needed to be replaced three to four times more often because of a shorter lifespan.

As the quality manager said, “Because we are so focused on unit price out of the box, we have lost sight of the long-term costs of having to replace these every seven years!”

A 2014 study by Denali Group of 20 electric and gas utilities in North America found that they had on average 3,647 total active suppliers, 39 strategic relationships, and 140 suppliers that account for 80 percent of their total external spend.

For forward-thinking utility procurement managers, a willingness to look at the challenges in achieving a holistic long-term successful outcome is a key element driving closer relationships with suppliers, Handfield said.

2.  They go beyond strategic sourcing to category management

Consultants at A.T. Kearney found in their latest report on excellence in procurement that the rate of benefit gains from sourcing had slowed, and procurement benefits as a percentage of influenced spend had returned to a historical average around four percent after strong advances in 2009 to nearly eight percent.

But leading procurement organizations found a way to buck that general trend, and one of the ways they did so was by reducing costs through category excellence.

Category management, which originated in the retail world and involves managing procurement of classes of products as an ongoing effort in cooperation with suppliers, goes beyond traditional strategic sourcing.

It is cyclical rather than linear and moves away from a focus on a single, contract-driven event, and in a significant way, goes hand in hand with the move toward closer supplier relationships mentioned above.

Consultant PWC found in a 2015 study that power companies have been slow implement this newer technique. The average cost savings for utilities at just three percent of total purchase spend lagged far behind other industries where category management is more prevalent, such as semiconductors at 10.3 percent and health care products at 7.7 percent.

Categories that offer high-impact opportunities for utilities are turbine maintenance, transformers, field services and IT services.

In a case study of a North American electric utility conducted by PWC, category management of vegetation control, line construction, transformer management and electrical components/maintenance, repair and operations achieved annual savings of six to 10 percent of the company’s total costs.

In the aforementioned Denali report, at the top of the list of initiatives that contributed to operational excellence among the utilities studied was the implementation of procurement software and automation initiatives.

In fact, implementing new procurement software was one of the top initiatives that created value, with 20 percent of respondents using this tactic, and the percentage of participants planning to increase their use of technology applications such as e-sourcing, eRFX, spend analysis and contract management was set to double or triple over two years.

Optimal use of technology often correlates to a utility bringing the maximum spend possible under its procurement organization, giving procurement greater influence and effectiveness.

The utilities in the Denali study managed 85 percent of the total corporate spend on average with a range from 50 percent to 95 percent. The top unmanaged categories included fuel, travel, rail transport, legal services, and purchased power.

Leading your own journey to utility procurement excellence

Achieving the most efficient and cost-effective supply chain possible is a long-term effort. But, in light of the ongoing turbulent environment in which electric utilities operate, it becomes imperative to continue to re-define excellence.

As a leading procurement solutions provider, eBid Systems has supported numerous utility procurement organizations in their efforts to automate and optimize supplier management, sourcing, contract management and more. We’d love to learn more about how we can help tackle your challenges. Contact us today to get going.

If you are planning your #procurement #webinar schedule further ahead, we recommend “Evolving Priorities in the… https://t.co/vGnz13uzfq